This was initial posted on SQL Server Central articles.

As one of dbatools’ first members, I’ve been using it for years and it’s really my goto tool. This task was no different!

Today’s tip and trick using dbatools is about generating an Excel workbook that contains lists of SQL Server roles and its members.

The Usefulness of these Reports

These reports are especially useful when performing tech-refreshes (migrating from an old version to a newer one) and you want to do some housekeeping. For example, finding logins that should be part of a role and they are not. Once you know there are problems, you decided to do a double-check on the whole list.

Excel makes these reports even better because they can be used to sort/filter large amounts of data: instances, roles and logins. Excel also makes the any data manipulation it easier when editing, marking members to be deleted, or highlighting issues when working with other teams.

I would like you to think about how much time you would need to:

I would say more time than you would like. Doing this manually needs way too many clicks and keystrokes for something that we can be using daily.

Back on track, what will we get?

The output will be an Excel (xlsx) file that will have multiple spreadsheets. In my case those are:

Here is a sneak-peak of the result that you will see right after opening the file.

The formatted table with headers, filters and top freeze-row will be there too!

To accomplish this we will write a PowerShell script and for that, we will using commands from two PowerShell modules.

dbatools is an open-source cross-platform PowerShell toolkit for SQL Server DBAs. With over 150 contributors from the SQL and PowerShell communities, dbatools is designed and written by the people who use it in their everyday work. dbatools includes solutions for everyday tasks like performing backups and restores, migrations, and setting up Availability Groups. dbatools is designed to enable SQL DBAs to reliably and repeatedly automate the usual daily tasks.

And on top of this, you should know that it counts with more than 500 commands.

The other module is ImportExcel, created by Doug Finke (T | B)

ImportExcel allows you to read and write Excel files without installing Microsoft Excel on your system.

“…without installing Microsoft Excel…” - How cool is that?!

How to install the modules

You can run the following command and both modules will be downloaded to your machine.

If you don’t have admin privileges on the machine you can use -Scope CurrentUser to get the modules installed under your profile.

dbatools' commands to use

You can use docs.dbatools.io to search for a command. Or, if you are in an offline environment, you can use the Find-DbaCommand.

For instance, because we are talking about logins, I would run the following command to search for dbatools commands that have the -Tag Login

The dbatools’ team has tagged all these (+20) commands as to be related with logins.

Taking a closer look, we can see some Get- commands and from those, we will use:

Getting the list of all logins on the instance is as easy as:

Since we may want to share this list with the client, I suggest to filter out some logins that will not be useful, or perhaps worse, these logins will confuse the client. I’m talking about your ‘renamedSA’ account, all the Windows users starting with ‘NT *’, or other logins that belong to you or your team and the client does not need to be aware of them.

With the Get-DbaLogin command, we have two types of filters. One way is to filter by an exact login name (for example “renamedSA”). For that, we need to use the -ExcludeLogin parameter. The other way is using the -ExcludeFilter. This one is very handy, as it accepts wildcards patterns. This means that we can filter out all the logins that start with “NT ” by passing the value “NT *”. You can add multiple patterns by splitting the list with a comma. -ExcludeFilter "NT *", "##*"

Using these parameters, I can run this command:

This cmdlet will get the list of all members for all server roles:

We want to keep this consistent with the previous command. If we filtered out logins before, we will have to filter them here as well. In this case, this command has a -Login parameter where we can specify a list of logins that we want to process.

We can leverage from the previous Get-DbaLogin command output to get the login’s names and pass them to the -Login parameter as $logins.Name

We can also use the -ExcludeDatabase parameter to filter out some databases we don’t want to get the data from.

This will get us a list of all members for all databases and all their roles:

Here we can, again, leverage from the previous Get-DbaLogin command output to get the login’s names and use them to filter the ones we want. But in this case, we don’t have any input parameter to pass this list. This means that, we will need to pass the values through the pipeline and filter using the Where-Object cmdlet.

This command also has the -ExcludeDatabase parameter available.

These are the three dbatools’ commands that we will be using to get our data. Let’s see what we need from the ‘ImportExcel’ module.

With the results, all there’s left to do is to output them to a nice Excel spreadsheet. For that, we just need to pipe our results to the Export-Excel command.

You should explore all the available parameter on this command, however, I will share the ones we will use on this script:

This means that we can call the Export-Excel command in the following way:

As I know that I will be using this heavily, I decided to create some variables to be set at the top of the script and use them in the commands. This way, I have just to change the instance name and run the command. You can also pick this code and wrap around a function and include the param() block so you can call it from the command line.

You can find all the parameters I use between lines 1 and 10.

Putting all together - The full script

What if I want to get different properties?

In the script, you can change the output list by changing the properties used on the Select-Object cmdlet (line 37).

How can I make the Excel file open automatically after exporting all data?

As shown on the “ImportExcel command” section, you can add the -Show parameter on the last Export-Excel command (line 62).

Want a slight change? Use the same technique but with different commands? Hopefully, this article gave you some ideas. Now it’s a question of changing the commands that get data for the ones you want and apply the same recipe to output to an Excel file.

In this article we could see how easy and fast an Excel file with multiple spreadsheets can be generate, each with a table with filters, colors, etc and..we don’t even need to have Microsoft Excel installed on the machine where we are running commands! 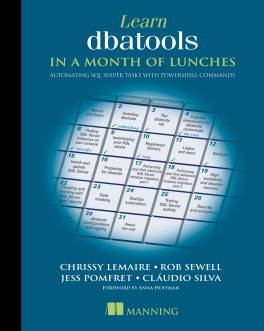 Grab your copy from Manning